Kaboom! That’s the magical sound when my favorite things, cinnamon and rolls, collide and become one. Warm, gooey, sweet cinnamon rolls are my favorite things. It’s a treat to have a cinnamon roll and a cup of tea. Enjoying the quiet, thinking deep thoughts, and inhaling the frosted cinnamon rolls starts the day with a bit of magic. Why, yes, I lick the frosting off my fingers. If you are thinking they are complex creatures, you are wrong. Cinnamon rolls are easy. They can be made partially ahead and refrigerated. Start on Saturday night, bake Sunday morning. If you’re thinking, “I don’t need 30 rolls” (You’re wrong, by the way), then you will be happy to know that the recipe can be halved. Unlike my “friend”, make sure to half ALL the ingredients. Ahem. Easter weekend I made these rolls three times. Let’s get baking. As usual, please read the directions through first, so  you have all the ingredients, and understand the steps and time involved.

2 cups of hot water (from the tap)

See, that wasn’t so bad. Relax. Pat yourself on your back. You made cinnamon rolls! Now go eat ’em. As you can see from the photo, I eyeballed the two inches. Oh well! They were still delicious! I brought a batch to an Easter brunch and there were none left. Just sayin’.

NOTE: I usually make the half the recipe unless I’m giving them as gifts. Make sure you measure out 1/2 of each ingredient and place in bowls. It’s easy to forget to decrease the ingredients by half. If you write down the 1/2 amount on the recipe, and then put it bowls, you’re less likely for forget. To make the half recipe go a little further, make the rolls 1 inch instead of 2 inches. 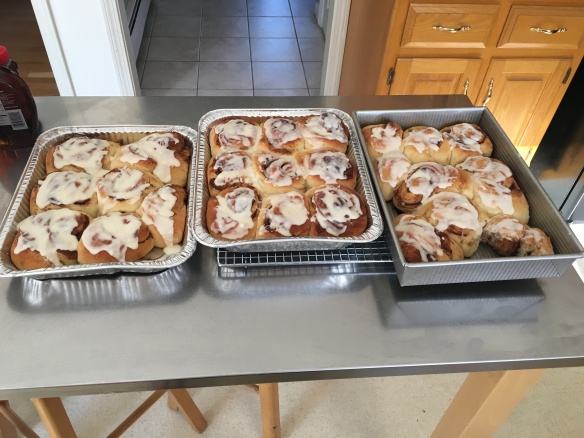